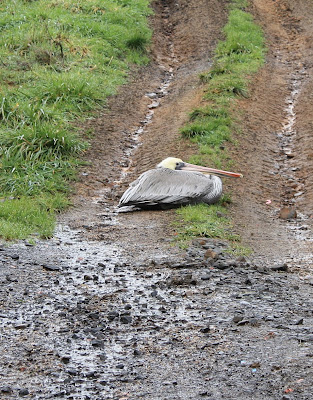 We experienced a tremendous wind storm several days ago. It was so frightening. We have many big trees around here and although it is exhilarating, it can be discomforting.
The next morning after my grandsons arrived and were out and about, one of them came in and told me that we had a pelican in the nursery. Did I think he was imagining..yes!
We live about 40 miles inland from the coast..and even at that, most of the pelicans either live further south or much more up on the north coast. This poor guy/girl had to have come at least 40 to 50 miles.
I spent almost an entire day trying to find some rescue for him. I must have called every agency I knew, the Chamber of Commerce people on the coast..on and on.
He/she did not survive the night. I will forever call the wind that was so terrific and terrifying the Pelican Wind. I wish that I could have helped he/she.

I know that we will have such winds again...please may we not have such vulnerable animals buffeted so far from their home.

Poor thing. I'm sorry you weren't able to find anyone who could help.

oh..poor the pelican. I'm sorry to hear this Ellen. I hope you don't have to go through the same thing again..

I'm so sorry. Thank you for sharing this beautiful photo. I love that pelican! Poor thing.